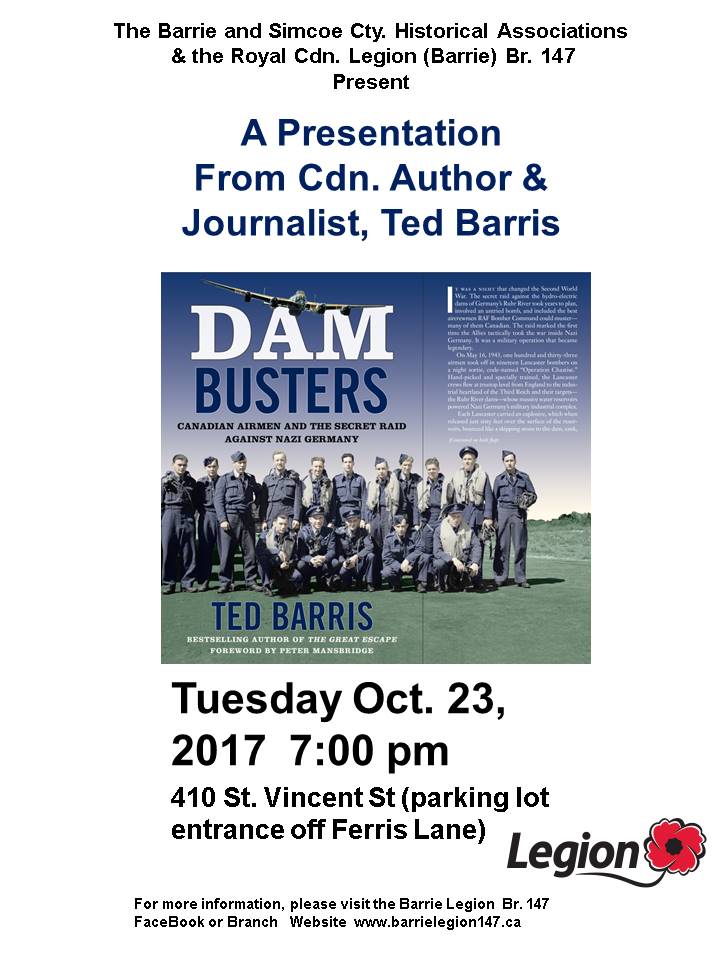 Ted will have copies of his new and previous books for sale and signing.
The Dam Busters will be priced at $36.75 (taxes included)

We will have Ted start to speak at 7:30pm but will invite everyone to be
there at 7pm so that we can discuss BHA/SCHA items and for the Legion to
speak to the Remembrance Day Ceremony and the Bells of Peace initiative
that Veterans Canada and the Royal Cdn. Legion's Dominion Command wants
each Branch Legion to "spearhead"
Welcome to the Barrie Historical Association.
Fall 2018
AMALGAMATION

This will be the last newsletter from the Barrie Historical Association. Jim
Willis has stepped down as treasurer after many years of valuable service
and the remaining board members are running out of energy.

Therefore we have decided to amalgamate with the Simcoe County
Historical Association in order to keep a public voice for the preservation
and celebration of our local history. At the moment the SCHA has a viable
executive and approximately 50 members. Combined with the roughly 25
members of the BHA we can have one stronger organization.

We do, however, have a healthy bank balance of about $14,000 that must be
dealt with. About $4,000 of this has been allocated for the Ontario Heritage
plaque for Sir James Gowan. This project has been delayed but the City of Barrie
has now agreed to its placement in Kempenfelt Park in the summer of 2019.

Another $2000 will be donated to the Simcoe County Historical Association to
help sustain our combined speaker programme.

In order to encourage your participation in the amalgamated SCHA all past
members of the BHA will be offered a free membership in the SCHA
through to the end of 2019. This means that you will receive online or by
mail, if necessary, the newsletter of the SCHA, “News and Views.”

The speaker programme will continue as before with the first fall meeting
at the Minesing Community Center, just east of the George Johnston
Highway (2347 Ronald Road) on Saturday September 22 at 2 pm.
There will be a presentation by the Les Bertram and Sons Construction
Company which has been responsible for many building projects in in the
Barrie area since 1939. Over the years there have been many fascinating
technological changes utilized by this fourth generation company. We hope
you will all come out for an afternoon meeting that offers something a little
bit different.

Our second meeting will be at the Barrie Legion on Tuesday October
23 at 7:30 pm when the popular Ted Barris will talk about his latest
book “The Dambusters” If you know anything about this daring squadron
of airmen from World War II and the bombing of the Ruhr dams you can be
sure Barris will bring his own captivating story of Canadian participation.

The final fall meeting will be held in the Huronia Room at City Hall on
Tuesday November 13 at 7:30, pm. The speaker this time will be
Danielle Kostrich who will give a presentation on the research and writing
of the drama “We Must Have More Men” that she co-wrote with Alex Dault.
“We Must Have More Men” is the story of Barrie’s involvement in World War I based on the personal notes of eight soldiers who fought in it. Last November it played to many sold-out audiences and was enthusiastically received.

We hope you will join us for this varied programme and that you will
continue with us as a member of the Simcoe County Historical Association.
Your support is vital to our ongoing efforts in “Preserving the Past in the
Present for the Future.” 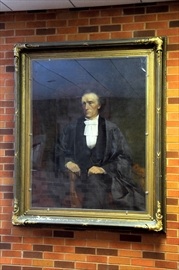 The photograph of Sir James Gowan has been restored. He served as a judge for over 40 years. When appointed in 1844 he was also the youngest in the British Empire at the age of 27.

UPDATE:
Gowan Portrait update The Barrie Historical Association has  managed to raise supplementary funds to cover the restoration of the Gowan portrait through the assistance of Simcoe County Council, the City of Barrie and private donors. The grand unveiling took place at City Hall on March 4, 2015. A second unveiling was held on March 5, 2015, during the Annual General Meeting and dinner of the Simcoe County law Association. On this occasion Chief Justice George Strathy, a descendant of Judge Gowan, was present to assist with the unveiling. The portrait has now been returned to the Barrie Courthouse where it will be on public display. 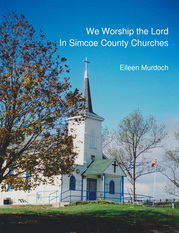 New Book: "We Worship the Lord in Simcoe County Churches"

The settlement of Simcoe County began in the early 19th century. The earliest settlers gathered together in a home to worship, and whenever possible, held services under the guidance of a traveling clergyman of any faith. As more families arrived, church buildings of various faiths were built. Most early churches were plain and made from local materials. As villages and towns arose and residents became more prosperous, church buildings became larger and more embellished.

With the later migration of the rural population to larger centres, churches are often the only remnant of the past life of many hamlets and crossroads communities. Some continue as places of worship, their original architecture untouched. Some have been altered, often converted to other uses. Many are abandoned or demolished with a cairn erected to mark the location.

For over twenty seven years, Eileen Murdoch has travelled throughout Simcoe County taking pictures of these landmark places of worship. Her photographs are an important record of this legacy of church buildings. Take time to appreciate their meaning and architectural glory, past and present.

Eileen was raised in Guthrie, Oro Township, and have lived in nearby Barrie, Ontario, since 1977. For a long time, church buildings have held a fascination for her. She likes to walk around them, sit in a pew inside, feel the ambience, and, of course, take pictures.

Also available, click below to
ORDER ONLINE FROM PUBLISHER directly